How You Cope: Six Innovators Share How They Make Space for Mental Health and Reflection

How You Cope: Six Innovators Share How They Make Space for Mental Health and Reflection

Life isn't easy. It can be even more challenging as makers of something new, whether that's as an entrepreneur, artist, builder or cofounder.

May is Mental Health Awareness Month; however, mental health is a year-round necessity. That's why Hacker Lab interviewed six Sacramento creatives and entrepreneurs on how they make space for themselves in an ever-bustling world.

One in four people experience depression, said David Loret de Mola, also known as Andyes. Mola will bring a performance from his “When the Bomb Drops” spoken-word album based on a radio announcer playing the world's last tracks, which Mola made after a suicide attempt.

“As freelancers and entrepreneurs, we don't have the supports to afford not being aware of where we're at,” Mola said. “Part of the human experience is something we never talk about.”

Mola has experienced tragedy, most recently losing his brother. He hopes this Saturday's show will bring a more Q&A-style format where people can open up about their experiences, too. 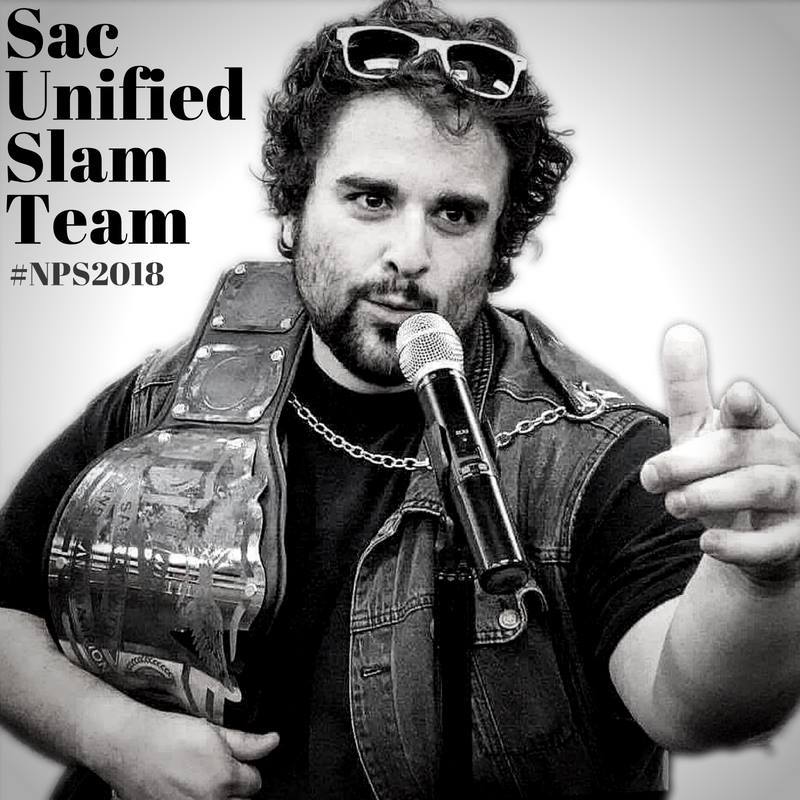 “At its worst, you just don't feel anything,” Mola described, remembering going from one of the top 30 tech support specialists at Apple to feeling nothing at a friend's funeral.

He found personal awareness to be a key towards making the life he wanted for himself.

“Learning my sighs... if I sigh more than 5 times in 30 minutes, it's usually a sign to take a break,” Mola said. “It's about finding your alarm system; and, learning to perceive the world the right way.”

“You can easily relive your story as the victim. Or, you can look at that as an opportunity to rise up. Either you figure it out, or you don't. And I'm still figuring it out.”

Jessilee Windhaus co-founded Empire Arts Collective in Sacramento, which just launched its Patreon. Knowing when to lean on others is key, she said. Windhaus and Emily Perez co-founded the collective in late 2015 to be a performing arts nonprofit that incubates local artists. 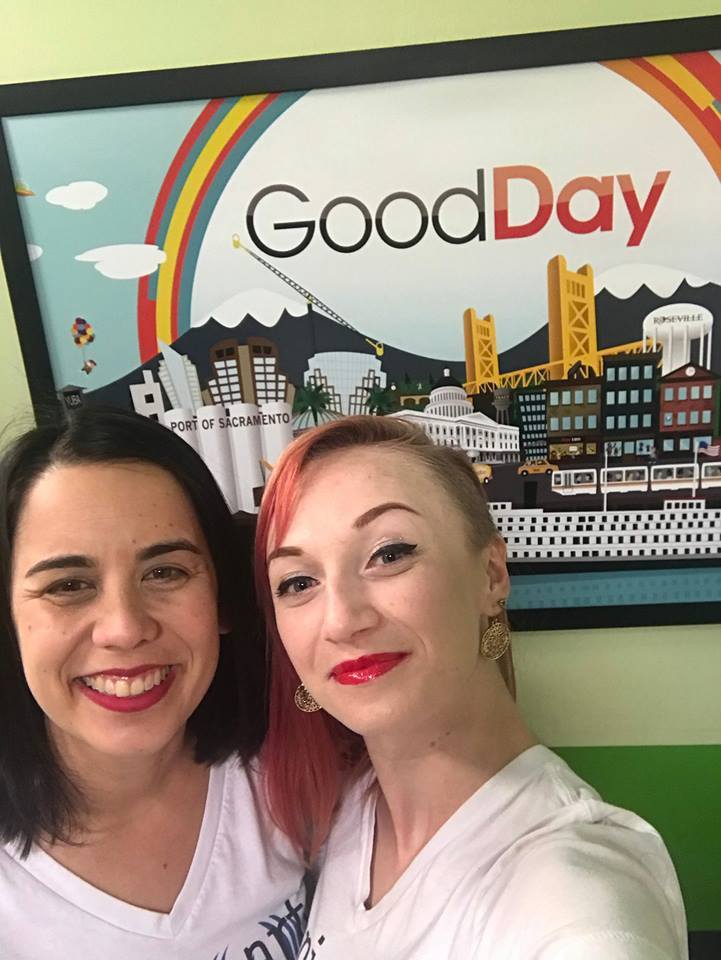 “We rely on each other and respect each other. That means being clear when we bite off more than we can chew. Other times, we rely on our board. Sometimes, we just take a break,” Windhaus said. “It's always a balancing act.”

She said keeping work "as work" has been important.

“It's really important to remind yourself what's important in life. Obviously, we do what we do because we love it. But we're not afraid to delegate if we're losing track of things. It's easy to lose the forest for the trees. Those times with your friends and family will sustain you for the longer hours later.”

“With all our projects, we revisit them frquently and ask, 'Does this bring joy?' If it doesn't, we leave it.”

Empire Arts Collective's summer's events include a Hamilton singalong on May 13, a choir concert on June 19, an open mic this Thursday. For the full event details, read more here.

Mars Hill models his life after the Wright Brothers: Try and try again.

Hill, a Hacker Lab member, has his eyes set on making robots and electric vehicles, building towards his goals each day. Sometimes, he runs into doubters of his dream. That only fuels his fire, he said. 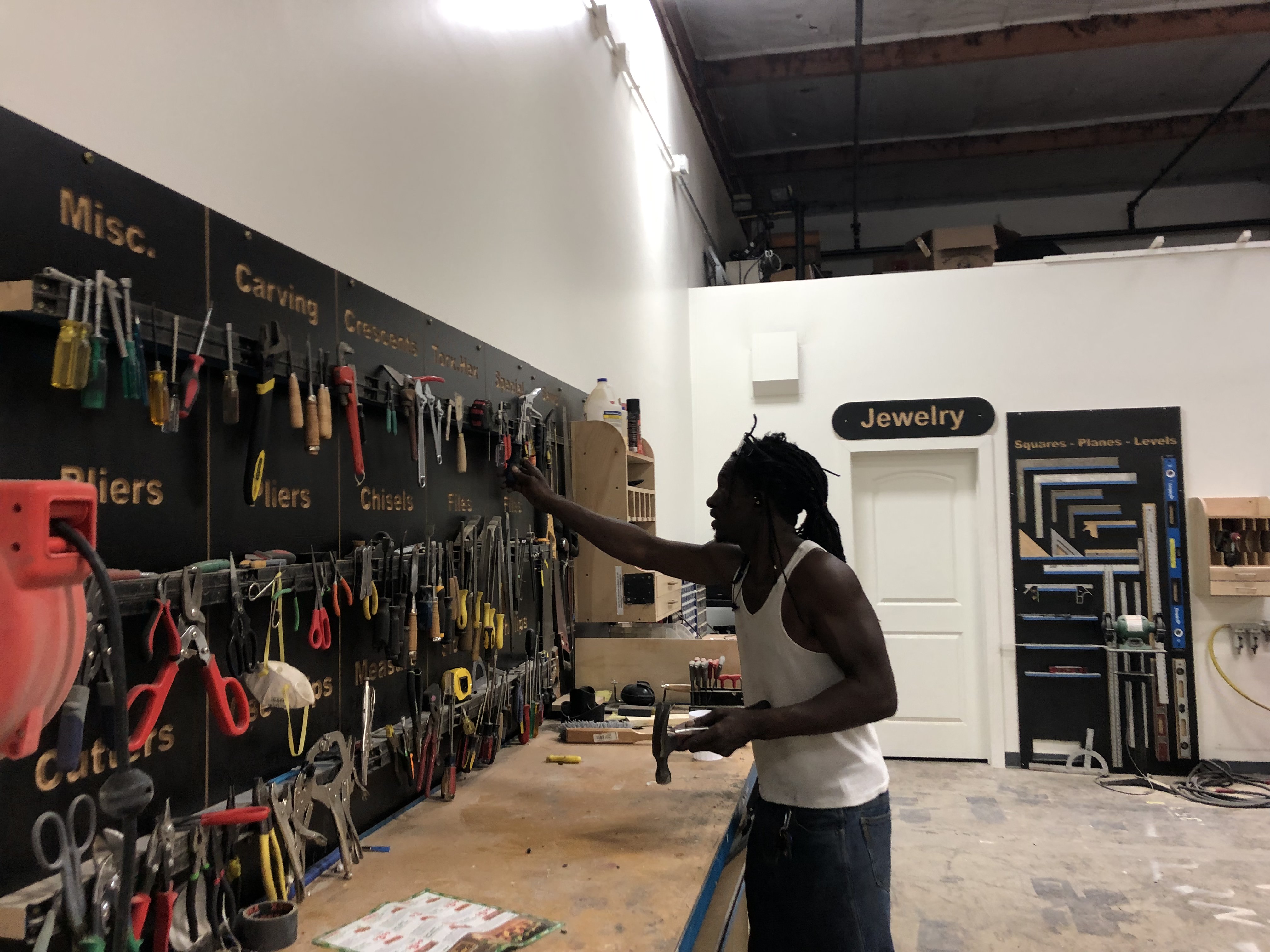 “I know there's always going to take a little more work, a few more touches that will bring me to the next realm,” he said while making his prototype robot with lasercut wood, motors and sensors.

“I run into critics from the tech world to brothers who don't believe,” Hill said. “Most of the pioneers had to shoot their way through success, manipulate, kill, lie destroy. I'm going to do that with love... I'm going to make it through this engineering day-by-day. We all come from the same space.”

Rob Backman was working door duty as a door-to-door salesman when he learned how to not take failure personally.

“The trick is this idea that we're naturally good at things. It's all about your growth mindset,” said Backman, an entrepreneur and Hacker Lab member. Grinning, he added, “I fail constantly.”

He was in the Bay Area selling As-Seen-on-TV quality merchandise, like inflatable air chairs. 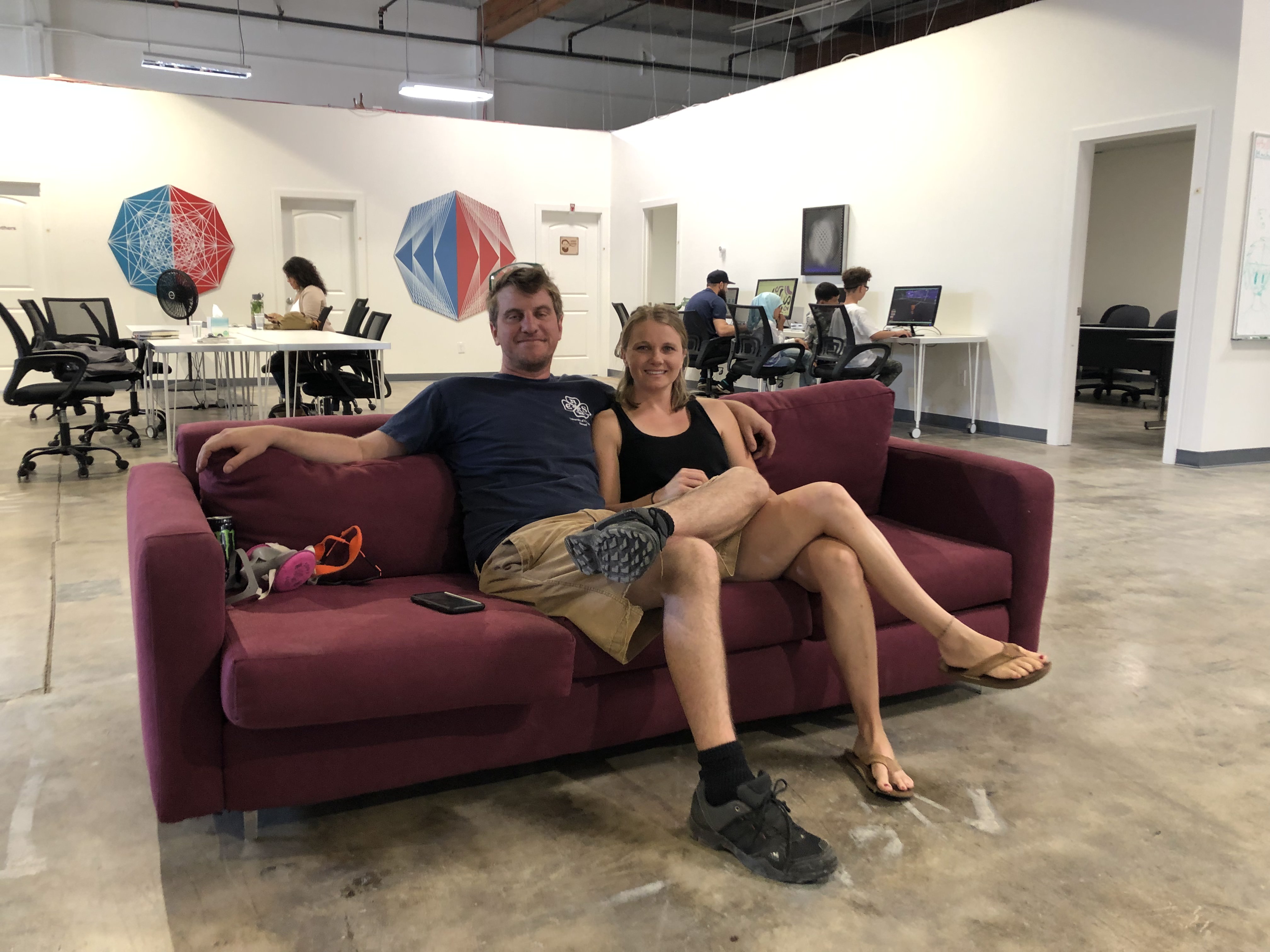 “I've been chased out of town by the Sheriff and kicked out of places. Being a door-to-door salesman, you have to fail 99 percent of the time,” Backman said. “That taught me how to deal with rejection — finding the signal in the noise of others' criticism.”

Backman said compartmentalization also helped him, along with maintaining hobbies, pacing yourself and knowing when to take a break. And, when to trust your gut.

“My most memorable experience from that time was with one of these chairs, which I knew weren't very good quality. In Pacifica, a guy came after me after they popped the minute he got home!”

Newsome, a father and Hacker Lab member, is starting from the ground-up, having just received his LLC. Asked how he's kept focus, he said it was about keeping his eyes on the prize. 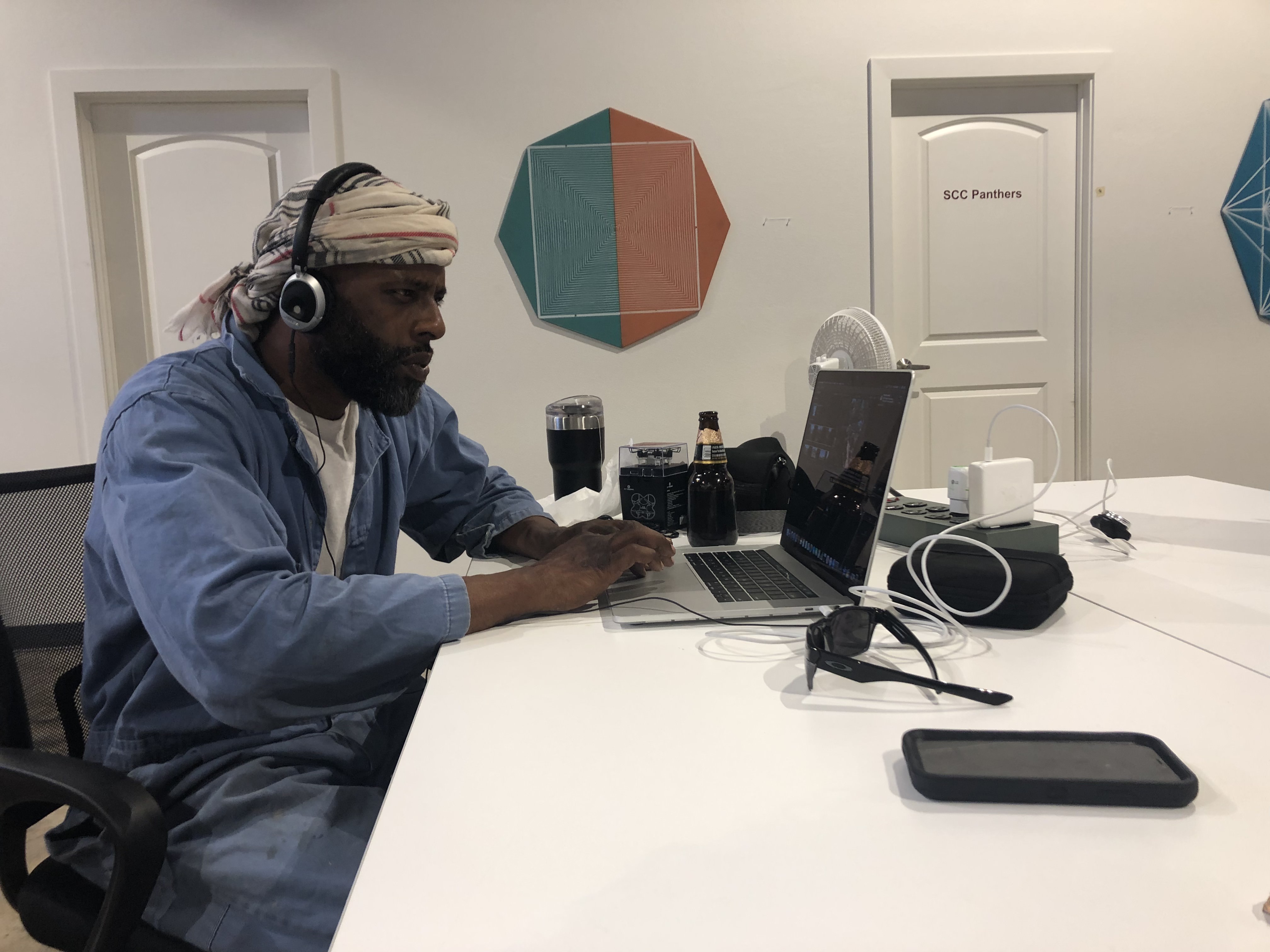 “Staying positive; staying focused; keeping people around me who are motivated and living within their means; trying to make stuff and bounce waves off each other,” Newsome said. “The struggle is what makes it sweet at the end. It's okay.”

“We're all born to toil and struggle. That's what we do,” he added. “If we didn't do that, we wouldn't make success. Trust your gut. Stand your ground. And don't bled the well dry... If you do, there's no opportunity for that well. You've got to remain balanced. In everything I do, I try the middle course.”

Justin Lewis is a partner and Chief Information Officer at Smith Moore & Associates. As a business owner, Lewis makes time for himself to delegate and be the leader he wants to be.

“As a business owner, it seems like I should be able to just ask our staff to do things for me, but it is actually often a struggle for me,” Lewis wrote. “I've found that a short mental check-in, like a 3 minute meditation, will help me get through the initial mental struggle.”

Other tips he added:

“... walk in nature as much as I can. Granite and evergreens are my spirit animals.
“... see my therapist/coach twice a week. It's important to me to have an objective viewpoint working on my brain;”
“... sit just quietly and try not to think;”
“... try to get the rest I need. With 2 young children, that's not always possible, but being grateful for the hours I did get is important to me;”
“... try to make time for friends and family.”

Thank you to the makers, artists and entrepreneurs who shared their experience.